The season is over, but we move stiill ahead! Last Sunday in December we run the train between 11 am and 3 pm. 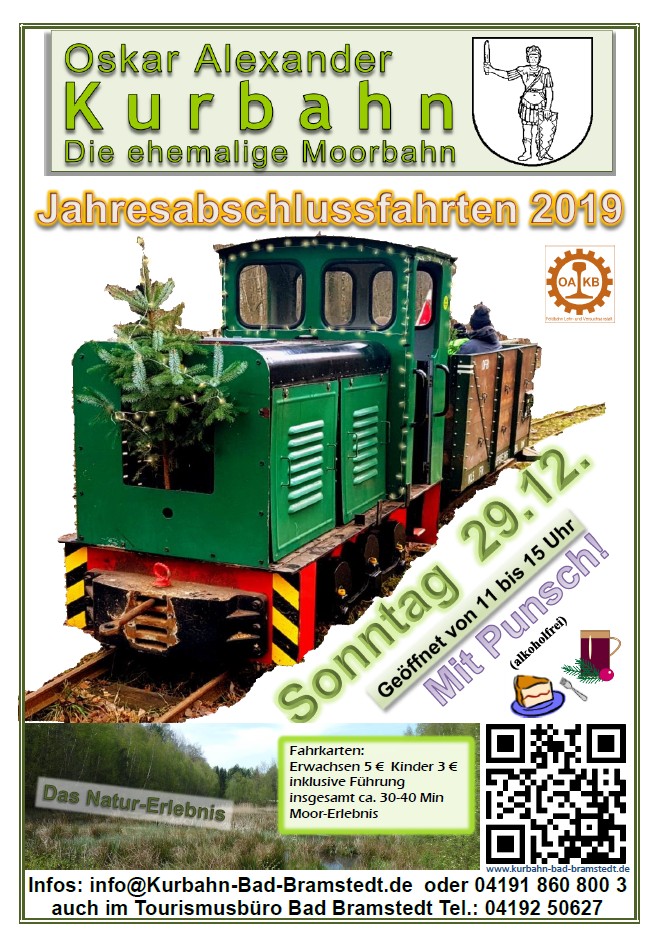 Tickets are available in our booth and additionally we offer

Everything is 1 Euro per piece.

In many cities they lie in the pavement: so-called stumbling blocks (Strolpersteine), which remind of the fate of Nazi persecutees. Bad Bramstedt has two since Thursday. They remind of the clinic founder Mr. Oskar Alexander and his son Robert. The father died in the concentration camp, the son fled to Colombia.

Artist Mr. Gunter Demnig (with hat) has been laying stumbling blocks for 20 years. These are reminiscent of Oscar and Robert Alexander. Initiator Fritz Bredfeldt invited the descendants Karen Alexander and Lizi Alexander-Christiansen to the ceremony. Source: Einar Behn

The name Oskar Alexander is closely linked to the recent history of Bad Bramstedt. He founded in the 1930s, the former rheumatism ...

The article is further readable for subscribers of the newspaper >>

A Danish is a loyal fan of the Moorbahn

A Danish is a loyal fan of the Moorbahn

Those last years have already rolled back to bad Moorbahn in Bad Bramstedt. A few heartbeats even though the weather is opening seasonally at the facility in Kurgebiet. With this: Jens Gönland from Denmark. "It already belongs to the inventory," said the railways about their fan.


. Gönland comes with his wife Doris regularly to Bad Bramstedt, to teach them about the latest stand, was the Federation German Deutsche Feldbahn on which Beine had set. And of course it is also a drive in the Moor.

“I spent a couple of years in a Birkenweg in a pension. As I stood on the balcony in the morning, I heard the noise of the mooring train, ”reports the Freund alter rail. Through this coincidence, he said, he became aware of the Moorbahn. "I am in love with old locks, especially in narrow gauge railways," said the Dan. Following the noise, he then stumbles upon Andreas Knopf and his crew, who have been "rumbling" for 20 years in the Moor Railway and ensuring that this rare danger to generations still remains. “Most of all, I'm interested in the technology. But also for the special purpose, for which the train is set in Bad Bramstedt, is very interesting, "said the 69-year-old. The train brought earlier Moor in the then Rheumaklinik, today's Klinikum Bad Bramstedt. It is used for Moorbäder.


A total of 18 trips had been planned by the German Fedreation Feldbahn in that year, some connected with a nature drive in the moor. The next drive is on Sunday, April 15, from 10am to 5pm. From 10.30 o'clock it provides a mooring.

Courtesy of the Segeberger Zeitung

Remark: The correct Name of the supporter is Jens Grønlund.

The care and maintenance of the bog is a continuous process that we are constantly monitoring. The necessary measures are carried out as gently as possible and are under the supervision of our Gisela.

You may already know them from the nature tours, where you can learn a lot about the flora and fauna of the site. In the course of October 2019, trees and shrubs that were to be removed were currently marked.

The selection is made, among other things, according to the location of the tree (north or south side of the moor basin) and the necessary shade that is necessary for the moor, especially in summer.

Our work is in the period from mid-October to mid-April when no birds nest.

If you would like to learn more about the nature of the area, you are welcome to come for a nature tour. Sturdy footwear is a prerequisite. Just bring that along with your good mood.

Accessibility of the dams

The site consists of a number of pools in which the bog is stored. These basins are a characteristic feature of the site. The moor was brought in and out of the pools via these. These dams are gradually made accessible again in order to bring you closer to nature. This work has been running since summer 2019.

You can see the pools and dams on your train ride. You will then learn how these are used on the moor tour that begins at the moor station.

What happens to the wood and shrubbery?

The wood and shrub obtained during the work will continue to be used. Trees are cut to 1.35 m and are then available as fuel for your stove. Natural, it couldn't be more natural.

Lower-strength trees are also used as fence material in order to build barriers for your safety.

Shrubbery is transported to the edge of the site and integrated into the Benjes hedge. The hedge delimits the area on the one hand, but also allows game to enter and leave the area.

No material is wasted, everything is reused. The nature cycle remains intact.

The Moorbahnhof is currently lifted up over the entire area. This includes gras removal and track adjustments to discover damages. Damages will then be maintained for safe train operation.

Here you can see the power of gradd - even hardwood is damaged:

Our work day at bright sunshine with some images:

From 11 a.m. Mohammed, Andreas and Christian met and cleared away any leftovers on the tracks. (Wood, stones) Then it was time to build the track on the railway turnout, which was a little tricky, since here a switch follows a switch. Finally, Christian had the idea to save a few daffodils that had gotten lost in a heap (probably carried off from the clinic there?) And planted in front of the processing plant. The bunch will soon disappear, it would be a shame if the flowers were gone too.